The Liposomal Iron, is a preparation based on ferric pyrophosphate carried within a phospholipid membrane of vegetable origin (soya), which has compared to other formulations based on iron

Absorption of ionic iron occurs mainly at the duodenal level and is mediated by specific carriers. Under normal conditions only 15-20% of the administered iron is absorbed, so it does not make sense to force the transport capacity of the carriers with high doses. The sophisticated incorporation technology in natural phospholipids makes the iron highly bioavailable, well tolerated and rapidly absorbed. The presence of the liposomal envelope, in fact, protecting the iron from contact with the gastric mucosa avoids the pro-oxidant effect of free iron. The liposomal protection allows the microelement to pass unimpaired the gastric environment to be absorbed directly at the level of the whole small intestine and not only duodenal. The transmission through liposomal technology corresponds, in our organism, to the transport of various substances by chylomicrons. These natural vehicles, in fact, are the dense and voluminous lipoproteins that represent the form of transport of food fats from the intestine to the various tissues. This similarity between liposomes and chylomicrons allows liposomal molecules to exploit the same metabolic pathways that the organism generally enacts for chylomicrons. The ingested iron liposome in the intestinal lumen is absorbed directly by the M cells (and not by the enterocytes), cells that originate from the lymphatic system and are located throughout the small intestine. Subsequently, the liposome is incorporated by endocytosis from the macrophages and through the lymphatic torrent reaches, intact, the hepatocytes. Within the hepatocytes the liposome will be “opened” by the lysosomal enzymes thus making the iron available for the organism. The absorption and bioavailability of the liposomal iron with respect to the other iron salts, commonly used in the formulation of the products present on the market, has been evaluated on an animal model. These studies have shown that thanks to the liposomal technology, the absorption of liposomal pyrophosphate iron is 3.5 times greater than free pyrophosphate iron, 2.7 times higher than iron sulfate and 4.1 times higher than the iron gluconate. In addition, the plasma concentration of liposomal iron was found to be maximal after two hours from intake, which ensures greater bioavailability of the element for all metabolic processes.

As we have previously indicated, liposomes are organic substances consisting of an external double layer of phospholipids containing substances of different nature.

Absorption of liposomes Phospholipids are very particular molecules with a hydrophilic head and a hydrophobic tail. When inserted in an aqueous medium, the hydrophobic tails are aligned with each other, placing themselves towards the inside of this “shell”, while the rounded heads remain in the surface, as can be seen from the figure. 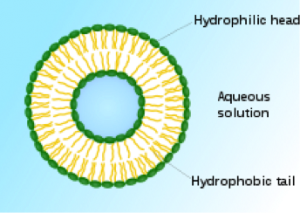 This site uses cookies. By continuing to browse the site, you are agreeing to our use of cookies.OkRead more